Such a beautiful day is mostly celebrated by lovers, but you should do the same even if you are still single or you just broke up with the love of your life, because love is such an innocent feeling, that only the thought of it should bring a smile on your face. Today I want to suggest you a few movies that you should give a try on Valentine’s day, even if you are alone or with your beloved. 😉 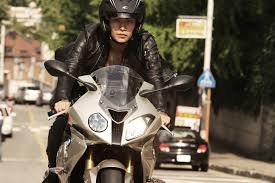 Who needs Valentine when Lee Min-Ki is so hot? :p

Ki-Soo (Lee Min-Ki), Myung-Sik (Kim In-Kwon) and Ah-Rom (Kang Ye-Won) were members of the same notorious motorcycle gang. They enjoyed their days roaming the streets recklessly on their motorcycles.

Now, Ki-Soo works as a motorcycle delivery man, Myung-Sik is a motorcycle cop and Ah-Rom is a member of pop idol group. One day, Ki-Soo has Ah-Rom riding on the back of his motorcycle as he makes a delivery. To his surprise the delivered package explodes as he leaves the building.  Ki-Soo’s cellphone rings and he hears a voice telling him that their is another bomb planted in his helmet which Ah-Rom is wearing. Ki-Soo is ordered to take another delivery. If the delivery is late or he attempts to run away the helmet will explode.

2. Love is not blind 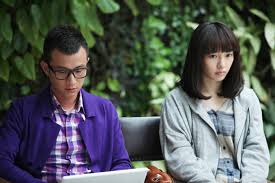 Love is not blind, but what about you? The love of your life can be right next to you. 😉

In the film, the main character, Huang Xiaoxian, is a 27-year-old woman who dreams of marriage. She has been in love with her boyfriend for 7 years. But she finally breaks up with him after she sees her boyfriend going shopping with her best friend intimately. Xiaoxian starts recovering from depression as the movie begins. During that period, her partner, Wang Xiaojian, helps her a lot. In the end, Xiaoxian is deeply touched by Xiaojian and falls in love with him. She finds the one who will always keep her company within 1 metre. Don’t worry: I have for you the best dating tips. 😉

The Cyrano Agency consists of four people from a theater troupe who offers a unique cupid service for lovelorn clients. The company intricately devises and implements schemes, custom tailored to match the interests of their intended target, for the ultimate goal of obtaining romance for their client. The boss and mastermind behind the agency is Byung-Hoon (Uhm Tae-Woong). Things take a strange twist at the Cyrano Agency when a new client named Sang-Yong (Daniel Choi) enters their office. Sang-Yong is a straight-laced financial trader who is rather inept with personal relationships. He has fallen for a free spirited woman named Hee-Joong (Lee Min-Jung) and seeks out the Cyrano Agency’s help. The boss for the Cyrano Agency,  Byung-Hoon, then notices that Hee-Joong is his ex-girlfriend with whom he has really never gotten over.

Because we should think of single mothers/fathers as well.

Baby and I is the story of a high school student (Han Joon Su) who is a troublemaker. He always quarrels with his parents and does not obey them. One day his parents are sick of his bad behavior and run away from home. Despite his parents having runaway, he is not embarrassed. Rather he is happy that he is free. He goes shopping for a party with his friends in his empty house. When he buys something and comes back to his cart, there was a baby with a letter: It would be better to have this baby be raised by Joon Su…

Let’s remember how we first met. ^^

Let’s know each other in a different way. 🙂

“If I Were You” is the first Chinese romance comedy about mind-switching. Jimmy Lin and Di Yao play a couple who meet coincidentally and have a mind-switching experience after exposure to radioactive energy. 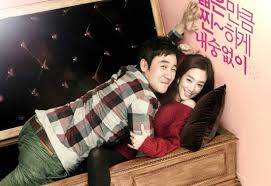 Oh Song-kyung (Jung Ryeo-won) is a well organized 28-year-old bank teller. She meticulously has a plan for everything, including getting married through a dating agency. Taekwondo master Kang Dong-joo’s (Uhm Tae-woong) biggest pleasure is buying lottery tickets in hopes of one day hitting the jackpot. In reality, however, he’s an incompetent young man who barely makes ends meet and mooches off his younger brother (Park Ki-woong). He is forced to register with a dating agency because of pressure from his sister-in-law (Yoo Sun) who wants to kick him out of their house.

This entry was posted in Dramas - General and tagged asian movies for valentine's day, baby and i, cyrano dating agency, hear me, if i were you, love is not blind, neverending story, quick. Bookmark the permalink.