What Steeleye has been up to: 3 Bollywood films that I have seen recently

I haven’t posted anything in a long while. First, I’ve been busy. Second, I have become a little tired of dramaland of late. So for a change of climate I went to check what’s happening in Bollywood.  Here I offer a short comments on the three Bolly movies I have had a chance to see most recently. I personally do appreciate Bollywood movies for taking the time to develop the story over a three hour period. Most of the films I’ve been watching recently DO focus on the story rather than musical numbers.

DIGRESSION: Well, if this trend continues I think Yeona and I will have to consider changing the blog name to Yeona and Bladey take on wolrdwide cinema because right now it looks like the blog may grow to include other types of entertainment, not just Asian soaps. Well. Anyway. As I was saying… 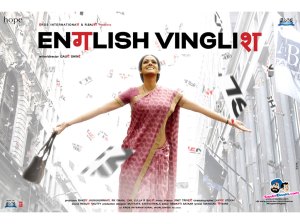 Summary: A quiet, sweet tempered housewife endures small slights from her well-educated husband and daughter everyday because of her inability to speak and understand English. (134 mins.)

Now this is a movie that I believe every person who has ever struggled to learn a foreign language can identify with! I think we can identify with the humiliation and the pain when the way we speak is being laughed at by people who have zero empathy or those who make mindless jokes! It’s especially hurtful when it comes from someone you love. The language school becomes so lovely- like a big family, no border problem, where differences enrich rather than impoverish! Excellent film. Very sensitive, with a lovely main character!

But it’s not just about that- the film is in general about being a stranger, about dealing with foreign customs…And..Who doesn’t feel alienation in our own surroundings from time to time? Who doesn’t struggle with oneself? I think this is a really great film for everyone, and it’s told with great empathy and sensitivity! Learning to love yourself is important for others to love you.

What I love about the main character is that she feels humbled by her family- but she doesn’t just accept it and let it go, she takes matters into her own hands and turns the oncoming feeling of self-pity and unhappiness into a beautiful and graceful reminder that women, mothers, or in general people like her shouldn’t be taken for granted just because they can’t do something as well as others do! And then people like her shouldn’t be put down just because they are different. A very emotionally resonant film, definitely one of the most relatable Indian movies I’ve ever seen!

Summary: An eight year old boy is thought to be lazy and a troublemaker, until the new art teacher has the patience and compassion to discover the real problem behind his struggles in school. (165 mins.)

The movie treads very familiar grounds as it centres on a problem student with dyslexia and a dedicated teacher who wants to help him. But Aamir does not take upo the screen for himself; he gives us, instead, a lovely character and presents him in his settings and in his own inner world. The boy is a super lovely dark horse, the teacher played by Aamir Khan discovers him and helpos to build up confidence. There are some scenes in which the boy’s imagination really comes alive on screen, allowing us to see into the boy’s own inner world. It’s another story from Bollywood that is actually both relatable and handled with a sense of imagination and sensitivity to the problems at hand. There is also the matter of the boy being pressured by his parents, teachers and the overall competition and the boy is completely misunderstood. Aamir Khan’s art teacher and the boy are very like-minded too, it allows them to bond 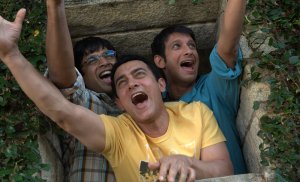 Summary: Two friends are searching for their long lost companion. They revisit their college days and recall the memories of their friend who inspired them to think differently, even as the rest of the world called them “idiots”. (170 mins.)

I felt this was unusually contemporary as far as Bollywood goes and it was entertaining. It was vibrant all through, both the good and the bad moments in their lives. A story of three friends. One of the friends is very much teaching them how to live and accept themselves. Nothing’s difficult if you put your mind to it. I do like Aamir in such inspiring roles. The silliness was sometimes endearing sometimes a little annoying but the endearing factor won over. Overall not my kind of humour but it was all mostly good-natured.

Dil Chahta Hai is about three distinct characters, Akash (Aamir Khan), Sameer (Saif Ali Khan) and Siddharth (Akshaye Khanna), their individual relationships and the effect that these relationships have on them.

Considering I am into friendship and coming of age stories, this one pretty much ticks all the boxes. The film focuses on a moment of change in the character lives, their decisions, arguments, their friendship as well as falling in love. Some lines had me in stitches. Light on the music, strong focus on the story. I enjoyed their friendship and the ways in which all of them arrived to the final scene in the credits; the film balanced well between the various characters, their dynamics and their own individual issues, making it into a comrehensive story. Very well-cast too. 3 hours well spent