The Japanese seem to have great skill for making movies about the most inconspicuous of subjects and for giving such subjects proper tone, gravity and sensitivity. What is delicate, is shown as delicate.  What is quaint, is made quaint delightfully so. The Great Passage is one such film. It tells the story of..making a dictionary and I found it to be a real delight. 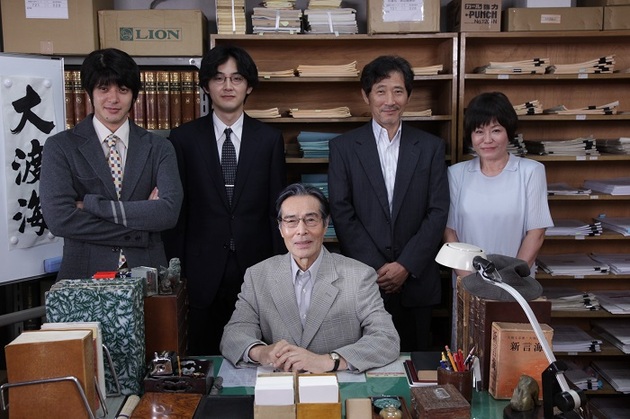 SYNOPSIS: Majime, an eccentric man in publishing company, who has unique ability of words, joins the team that will compile a new dictionary, ‘The Great Passage.’ In the eclectic team, he becomes immersed in the world of dictionaries. But the team is overwhelmed with problems. Will ‘The Great Passage’ ever be completed? (imdb)

A dictionary is like a ship which crosses the sea of words, in the words of one of the characters of the film, and language is what connects us both to reality and to others. To know words is like trying to know others. Language reflects who we are and what we are and what position we occupy towards the world. The meanings of words and, specifically,  how we mean them are a vital part of our connection with the world. Language and way of speaking and using words reveals our personal culture and manners. Majime, portrayed by Matsuda Ryuuhei, was so obscenely old-fashioned that he swept me off my feet and made me swoon at one point. The ideas he had, particularly for courting a certain girl he met, were delightfully quaint and he expressed that in appropriately quaint manner.He is forced by his coworkers to confront the idea of love with the definition of love. How does he approach it? How does he give expression to it and what is the resulting effect?  How out of place and a little out of time he seems, but how delightfully so.

Nothing much happens in the film: they mostly just develop the dictionary. The process is, of course, extremely painstaking. In the process of working on the dictionary, Majime learns to open up a little more to the world, to others and to himself. Joe Odagiri’s character provides a counter-balance to the serious Majime in his outgoing and supportive character who is very much in touch with the current reality. Language and words and their meanings change from person to person.

This movie, for a dictionary-lover like myself has proven to be a little gem. This may seem trivial and boring to some but I do find dictionaries to be a joy of language. I used to spend a lot of time just perusing them myself, just because I loved words and wanted to learn every single one of them. The film reminded me of that joy of immersing oneself into the study of individual words and the joy of considering what they mean to me as a person just as one might immerse oneself into experiencing and observing the world around us -including  observing how we as individuals position ourselves in it, how we fit.

I’m really happy that movies like this are made. They highlight the little things we may otherwise tend to take for granted. Language is changing and it will continue to change but let’s not forget about its beauty. Moreover,  it’s worthwile to think about the meaning behind words we often use just so, without much consideration for what other meanings they carry, what they may really mean or perhaps what they originally intended to mean.

The Great Passage highlights how the words and times are changing. It’s also about the need to adapt. After all making a dictionary takes years. In the meantime, thousands of new words get coined or meanings change…and besides, in an Internet, largely computerised era, do paper dictionaries even have any point of being any longer? And how does language adapt to  such a change? It’s a labour of passion and dedication if the dictionary gets done in such changing circumstances.