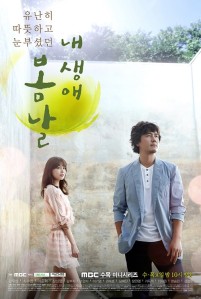 The Spring Days of My Life is a drama that can easily capture the heart of a sentimental person like myself. It seems to resemble the movie Return to me but as a good drama buddy of mine says, My Spring Days is more low-key. There is definitely a degree of lyrical subtlety to  this drama. This is just a very short comment for the time being.

Synopsis: A human melodrama about a woman who received heart transplant and a man who loved his late wife very much. Lee Bom Yi decided to live her life to the fullest as a token of gratitude for the donor. She then accidentally met Kang Dong Ha, a single father with two children, unaware that he was the husband of her donor. Kang Dong Ha is baffled that Lee Bom Yi shares many similar traits with his late wife. (dramawiki) 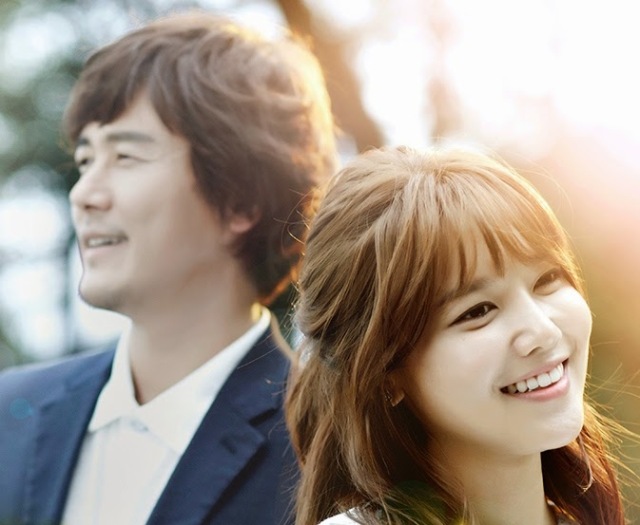 As for me, I find myself drawn to the very kind, very loving characters. A drama like this wants to offer a hopeful story..but this is where it may end up being too lyrical for its own good. As the drama nears completion I am filled with trepidation at the possible ending. Even the title of the drama is hinting at the possible ending as far as I’m concerned. The title also suggests to me a certain nostalgia for the best days of one’s life, the happiest days. Also, spring days suggest rebirth, renovation and hope.

Furthermore, Kam Woo Sung wrote a letter to fans saying that ending is unique..and that he actually signed up for the drama because of the ending. First this is a very kind gesture from the actor towards the fans. Second,  this is interesting. One does not sign up for a drama because of an ending that’s typical and standard, that’s for sure… I do imagine they will go for an ending that keeps the hopeful, restorative tone of the drama. They don’t want to fall into cliches or banalities. Besides, when the characters are so loving and when the drama has as few cliches as this one you can expect something less ordinary for the ending. Something that does not aim to please easily, but offer something more thoughtful. I expect this drama to end in a thoughtful manner, as a result. And thoughtful in a good, rather than cheap way.  But still I would want these two to be happy.  I can’t help thinking that because I do love these charactes so completely. I do believe this drama will end up being beautiful. But one should probably be open-minded about  the word unique…which is sometimes easier said than done. When you attach yourself to characters, you want them happy. I think it;s a natural reaction to the drama. But then there are different ways of achieving happiness and different ways of understanding happiness. This drama will reflect hope, I think. The hope of spring days of one’s life. So it;s going to be bittersweet but leave something for the viewer.  Many standard dramas just don’t do anything  worth remembering, while I want to think that this one tries to be more substantial. and it shows in characters, their motivations. It’s just such a loving drama.

Let me just add here that this drama couldn’t have asked for a better cast! Kam Woo Sung is always a delight, Sooyoung is showing her mettle as a likeable drama character and there is more to say, much much more.

Let me conclude this short reaction comment by stating that there is one thing this drama has in the heaps: this is heart. It is one of the finer Korean productions that offers a genuinely warm story.  Warm is something that most Korean production severely lack. I will return to the drama later this week.  For the moment I just can’t contain my enthusiasm so I felt like sharing my immediate reaction to it. I felt really impatient to share this.  A drama like this from Korea, that caters to sentiments and offers warm, loving characters, comes only ever so often. While the story does not avoid certain elements that may seem familiar to avid drama watchers, it uses them more in a more responsible and conscious manner. There is much for me to comment and discuss….But overall the writer has really done a good job and the cast works really well together. Soyoung and Kam woo Sung are so natural together, while the other characters are also people with their developments rather than mere ploys to propel a dramatic cliche. In fact, Kam Woo Sung and Sooyung move me in so many different ways in this drama and the story has a lyrical quality to it. It’s so mellow and full of love and good feeling. I love them together here. And the children are just adorable. There is an excellent family feel to the drama. Well more on this next time.